Recumbent trike touring is one of the best ways to spend time in the trike seat. 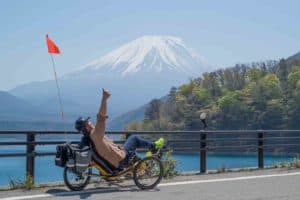 Even if you do a route for the 1000th time, there’s likely something you missed last time around.

In one week of awesome weather . . . blue skies, not one cloud, snow on the peaks I got to see the very best of Japan.

If you haven’t checked out the video, then you should do that first.

Today’s post gives details that are not covered in the video.

Performer Japan is located in Yamanashi Prefecture. Or in other words, Mt.Fuji country. 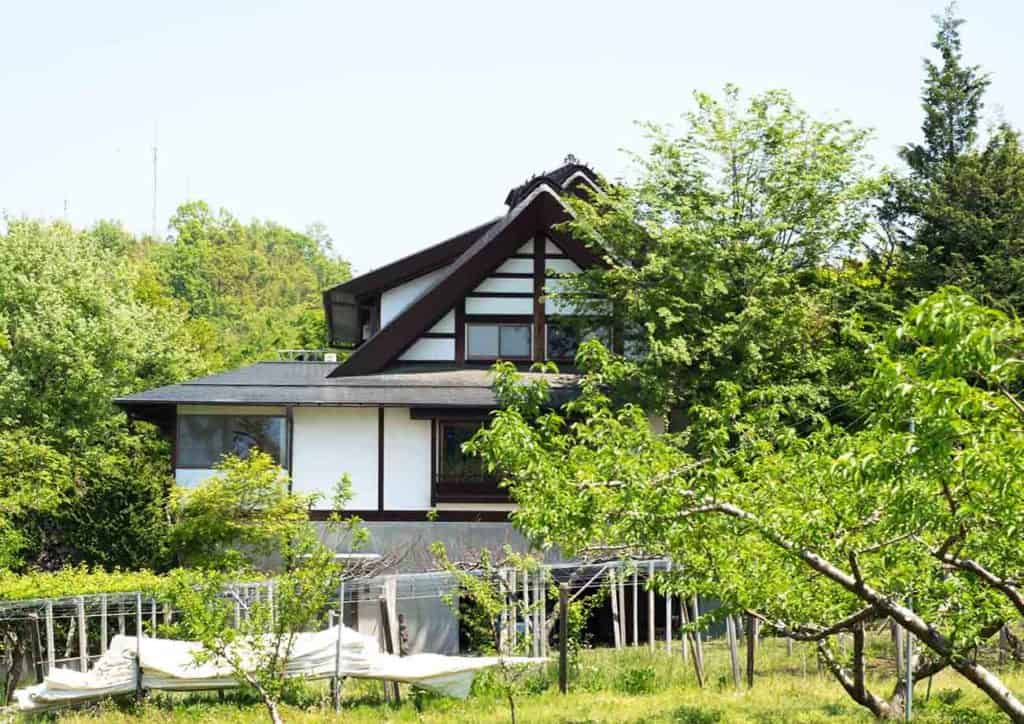 We’d be able to see Mt. Fuji ‘cept we back onto a mountain ridge that hides the full splendor of the mountain.

The view looking west is pretty good too. The ranges are still snowcapped from a late season burst of wintery weather the week before.

So on a cool Friday morning, middle of April, we put the bikes in the back of the van, and headed up the ridge.

Click to Check out 15 Reasons to Own a Recumbent Bike

The climb takes you up to around 1000m. This is the Fuji Five Lakes region. 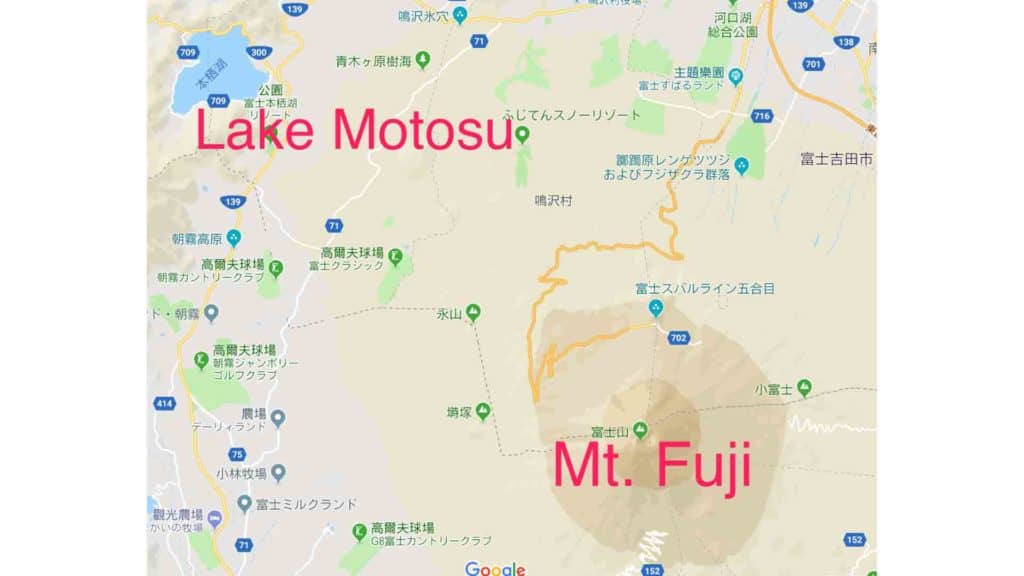 Lake Yamanaka in the East is the most well-developed area. We, however, headed for the most Westerly of the lakes, Motosuko (Lake Motosu).

An 18 km road runs around the lake’s shore with stunning views of Mt. Fuji. (Fast scroll down the page to those photos if you want to jump ahead).

True, you do get fantastic vistas of Mt.Fuji from each of the 5 lakes. It’s just that Motosuko is exceptionally beautiful yet still very quiet.

Tokyo By Bike has a good intro to cycling the Fuji Five Lakes region that I’d encourage you to check out.

We set out from the Eastern carpark at around 10am.

The temperature peaked in the high 20s across the middle of the day, giving a mild sunburn on wintery skin.

The air, though, was cool and with a breeze occasionally gusting off the lake, the wind chill meant wearing a sweater.

Setting out was not that easy. Just 100m down the road we came upon an avenue of blossoming Sakura.

Stopped us in our tracks!

We had not, technically, even got out of the carpark.

At this altitude the flowering season is delayed a few weeks. Some trees are still only in bud.

So if you are really into a Cherry Blossom tour of Japan, you could set aside from late March to at least late April.

You’ll have region after region to check out as the season unfolds. 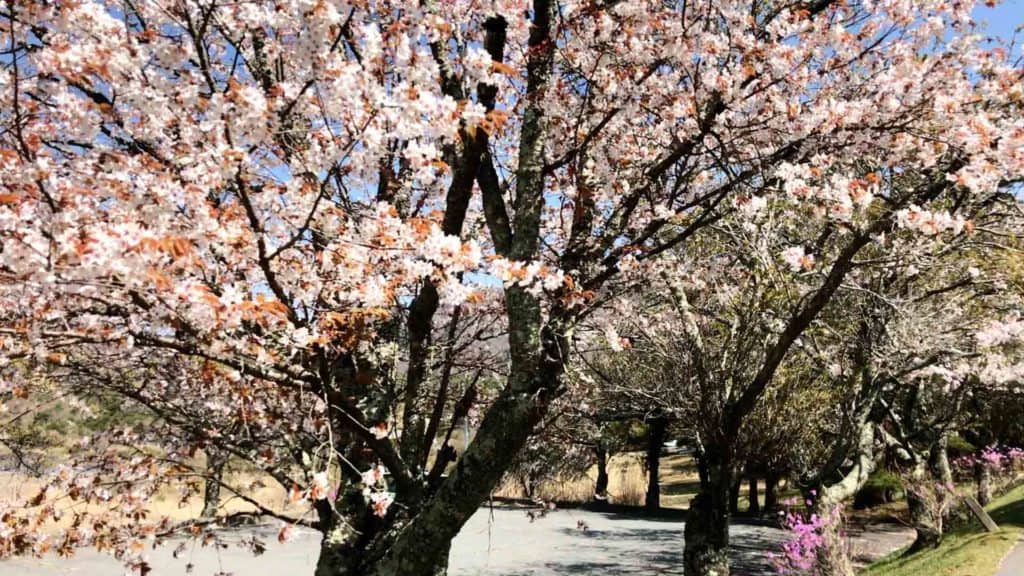 Several older couples came over to gaze in wonder at the bike. They sat in the trike seat, trying it on for size. 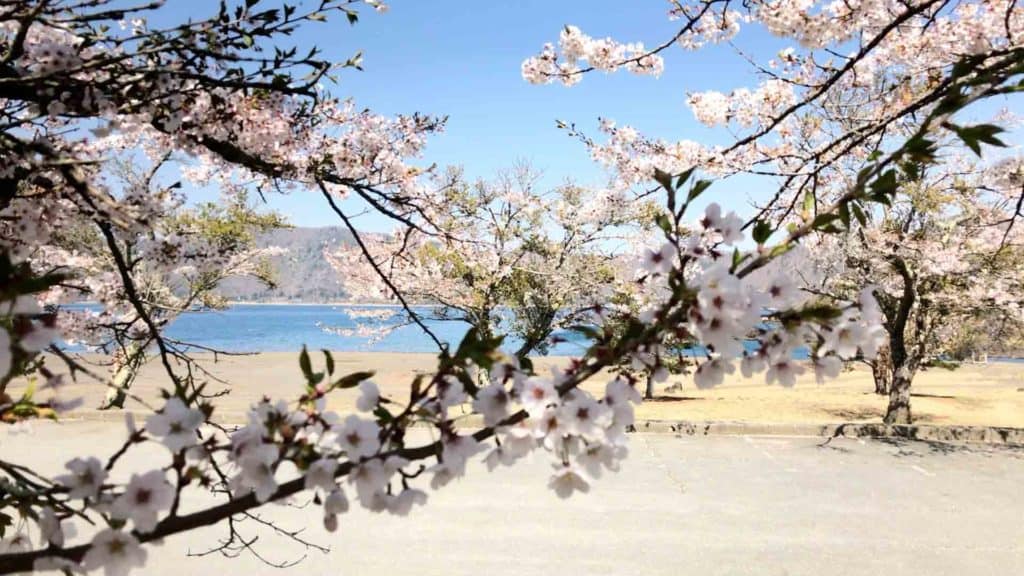 “What IS this?….You’re from Taiwan…manufacturer? Wow….these are so cool” or words to that effect.

Click Here to Check Out our Recumbent Trikes Guide

About an hour later we forced ourselves to finally move out and begin the circuit.

We head along the path, North, anti-clockwise, glimpsing the lake through stands of young saplings. 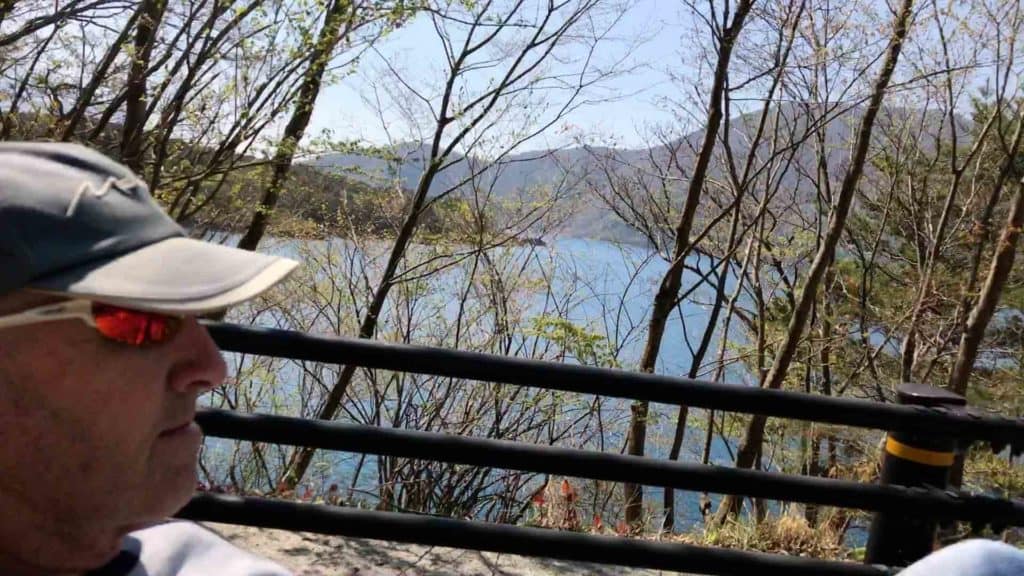 This mountain is extremely impressive if you have never seen it before. I’m REALLY holding back my words when I say this.

Mt. Fuji reaches out and grabs you . . . mezmerizing . . . (need a better superlative than this but it’ll do for now).

I was cruising along at a fair clip at the time when the trees suddenly gave way to the lake.

I happened to glance over my shoulder and there was Fuji, right in my face.

We screeched to a halt and began to take what would be a large number of photos for the day. 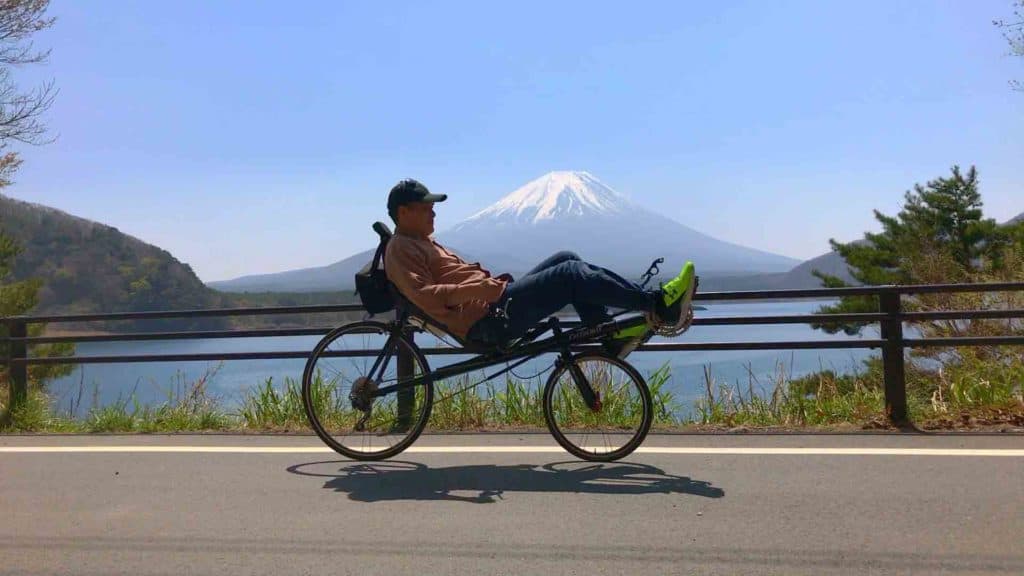 George was riding one of the early Performer Carbon bikes. He’s got comfortable on this particular model.

You know what it’s like; a bike fits you like a glove and you just keep riding it . . . swap out the components that wear out over time, and you are good to go for, well, pretty much for ever.

This model is no longer sold, replaced by the “Muses” model.

Sweeping past the Motosu Lake Side Camping ground you climb a short hill to a lookout parking area.

This affords surely one of the best views of Mt. Fuji that you could ever wish to see (although we bettered this a little later . . . and Lake Yamanashi gives you the opportunity to ride along the edge of the lake and get right up close to the mountain). 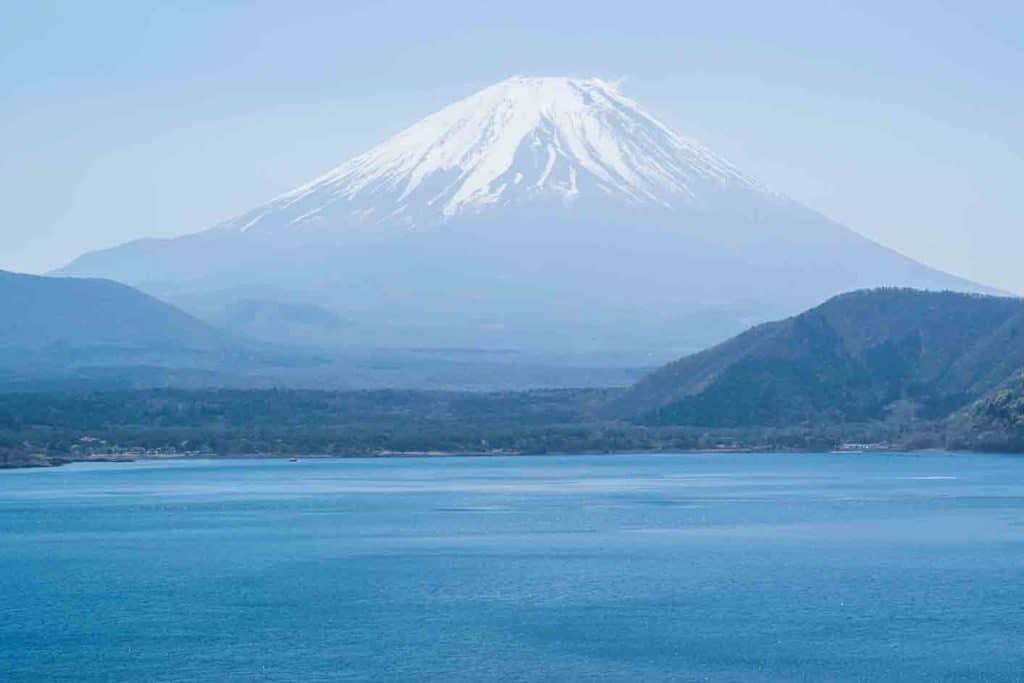 When we set out in the carpark earlier (in the photo you can that area located at the bottom of the hill on the right), we had talked to a couple from Europe.

They asked, “Where’s the place they took the image of Fuji for the banknote?”

They were right; and here it is. (Sorry, folks, if you ever read this . . . if we’d known in advance we’d certainly have set you headed in the right direction).

Up to now, you will have been following route 300.

There’s not a lot of traffic. But you will find heavy transports—with a narrow road shoulder, space is tight. Tricky recumbent trike touring . . .

Not really a problem, as the truckies are very patient and give you plenty of room.

Anyway, here that you move onto the smaller lakeside road.

There’s a rip-roaring descent down to the lakeside. If I’d known beforehand I would have set up a shot . . . gotta get a GoPro sooner than later too.

I didn’t quite feel like cranking my way back up to the top to give it another go.

This is route 709, the road where you really do take it easy.

Barely any traffic and Mt.Fuji poking up above the coastline’s points and coves.

Passing the turnoff to the Koan camping ground (great beach where you can pitch a tent and have Mt. Fuji permanently framed in the entrance) we cruised along to the first major point. 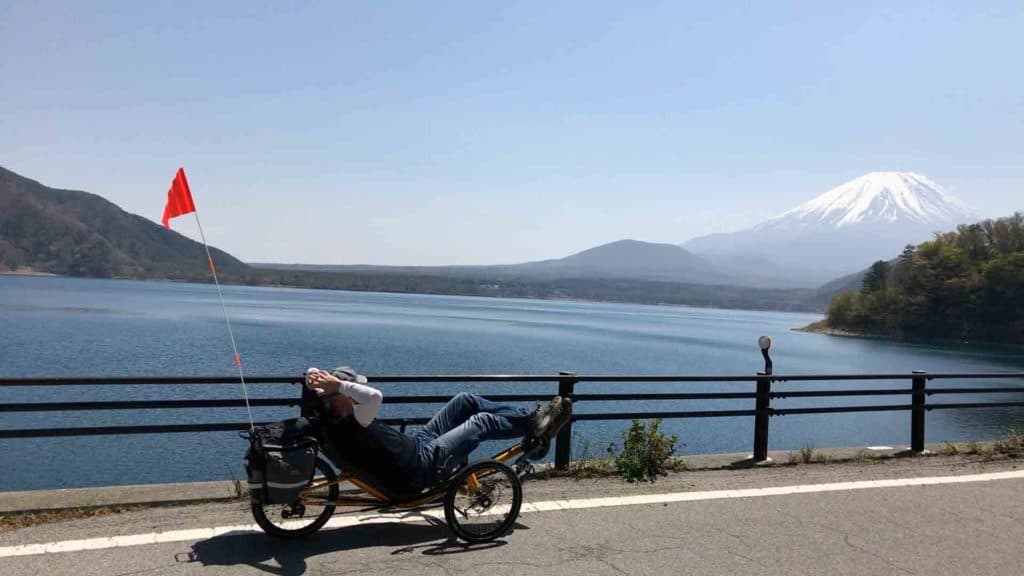 We thought we’d seen the best. Until finding this gem.

I’m from Australia where

When I come across a scene like this in the real world I will linger a tad longer than normal . . . not hard to do in a comfy recumbent trike seat.

The vista here is a painting made real.

The day was perfect. The only thing you could have wished for was a longer route . . . gives you the reason to spend the whole day there.

As it turned out we did a fair bit of back-tracking anyhow. Cruise along for a while . . . realize you need to get back to that “clearing just back there” to dally a while, absorb the scenery . . . let it really sink in.

George took the opportunity to get this shot in the books: the day, the time of year, the whole darned context . . . too good to pass up.

Here’s the great advantage of a recumbent trike over a recumbent bike—you don’t have to worry about maintaining balance.

You’ll see that in the video—rolling along, something catches your eye, you roll to a halt, sit back and say to yourself, “Well now, would you look at that.”

Sit there for as long as you want.

Reach around to the saddle bags to pull out a little something to munch on and appreciate just how good life can be.

The guard rail out of the way (tricky shot actually . . . hanging out over the drink)—a shot that you search your whole life for and not come close to finding.

The clear water of the lake . . . yes I did not take any shots of that darnit.

The water is crystal-clear, although close to the shore, the algae-covered rocks make the water look murky.

Probably would have been hard to capture without a polarizing filter anyway (makes me feel better about missing such an obvious shot). 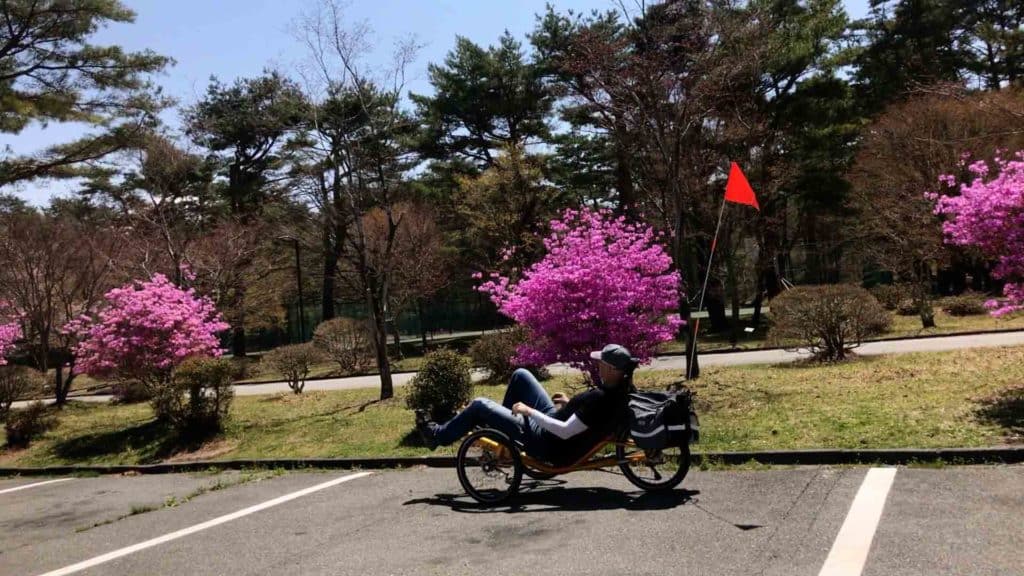 After a full morning’s riding. Dallying. Riding. Dallying some more . . . we made it back in time to think about a late-ish lunch somewhere.

We finish off with a final honorary bypass of yet another brace of Sakura.

Ok, they are not “Sakura” strictly speaking. I’m calling any tree with flowers a Sakura due to profound ignorance of the actual species in the area.

The point is a key reason to be touring a place such as the Five Lakes region is for the flowering trees at this time of year.

Just up the road from the car park—in the camping area—we noticed a series of trees blazing color in the early afternoon sun.

And that made it time for lunch.

Thanks for reading our account of this particular tour.

What about your own travels?
Have you been to this region yourself?
Is there a recumbent trike touring route that you would recommend to the readers?
Feel free to comment below . . . we’d love to hear what you have to say.